Although the President of PHOJC, Sir Peter Bottomley and the Department of Levelling Up are asking questions of the Secretary of State for Energy,  it is clear from the outcry  that we can - and I believe we must all do our bit to add pressure.If you agree, would you please all write to your own MPs requesting them to
obtain answers to this important question from the Secretary of State for energy.Many thanks
Sonia

Posted by Sonia McColl at 04:00 No comments:

DO PARK HOME OWNERS GET THE PROMISED £400 ENERGY REBATE?

- OR  - ARE WE TO BE FORGOTTEN AGAIN?
After receiving many emails yesterday, following the Chancellor's speech;  I emailed the Department of Levelling up, asking if park home owners would get this payment  - even if the park owner is the bill payer.
The Department responded almost immediately, saying  "They have raised this question today  with the Department for Business, Energy and Industrial Strategy (BEIS) and will get back to me as soon as they get a reply.
IN ADDITION.  I emailed our President, Sir Peter Bottomley  at 7.24 this morning and asked Sir Peter to ascertain if park home owners who are forced to pay for their energy through a site owner (who holds the account) can benefit - and how will they get the money.
I will post the answers as soon as I have them.
Sonia
Posted by Sonia McColl at 06:57 No comments: 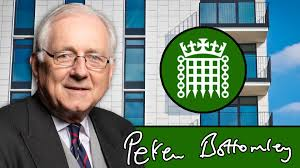 A MUCH WELCOMED MOVE:

Today, PHOJC members have  received the below from our colleague Sonia McColl. It is both self-explanatory and much welcomed where work and efforts in the background usually go unseen.  This improves all our hopes that  more will be done more quickly:

I have not as yet heard from the Department with regard to the change from RPI to CPI - but if it comes later, I will report.   However, following on from his question to the Prime Minister on our behalf, I have received the letter below from our President Sir Peter Bottomley.  I am told that this morning, he has sent this letter to the Secretary of State, Michael Gove MP.  When I hear the outcome, I will post it to you all.

Hopefully, this morning we will all receive help from the government.  I have already emailed to thank Sir Peter for his continued support.  Please  read Sir Peter's letter - which I hope will bring the right result for all park home residents.

I write in my capacity as vice- chair of the All-Party Parliamentary Group for Park Homes (APPG) and President for the Park Homes Owners Justice Campaign (PHOJC) concerning Government’s review of the Mobile Homes Act 2013 in England including the need for greater support and protection for park home owners.

Government issued its response that included proposing to strengthen existing legislation to: (a) improve residents rights (b) give local authorities greater enforcement powers against

rogue/unscrupulous site owners and review the pitch fee inflationary index from the Retail Price Index (RPI) to the Consumer Price Index (CPI).  and on commission fees payable on the sale of any park home,

Pitch fees had been increased by the RPI for many years, but their pensions were linked to increases in the CPI. In 2018 following the pitch fee review as part of its response Government concluded that it had: “…Considered all the arguments put forward including concerns about affordability for both residents and site owners.  We also considered the merits of using CPI or RPI as the pitch fee review inflationary index and have concluded that CPI is the most appropriate inflationary index.

The Government will introduce legislation in due course to change the pitch fee review inflationary index from RPI to CPI, when parliamentary time allows.”

You will agree, it is now time for England to level- up and provide greater protection for park home owners. Might you kindly provide a timeframe when Government will commit to addressing this issue that continues to impact negatively lives of park home residents and their families.

I look forward to hearing back from you.

Posted by Sonia McColl at 05:38 No comments:

I am on the train and have attended the APPG for Park Homes Meeting today.  A lot was said on many subjects which will be in the minutes that can be read later.

Currently  the important subjects  that affects every park home resident in the country, are RPI to CPI and the 10% Commission charge.  I know this is number one in the thoughts of residents as pricesescalate and it must be dealt with.

Sir Christopher Chope and Sir Peter Bottemley questioned this at some length.  I put everything forward that I could and voiced what I know are your thoughts on these subjects.The fact is, that the Department were not at liberty to give an answer today or divulge what is happening.

I pushed them as far as it was possible to go and I have been promised and given permission to tell you that they will email me direct next week with regard to RPI to CPI.

I can guess at what might be happening - but it would be wrong of me to speculate.
They are all very aware of how the residents feel and as soon as I hear from them, I will post to you all.

To get answers was frustrating - to say the least - like drawing teeth.
However I have their promise and I can also tell you that the 10% Commission Report is completed and will be published very soon.

I hope - very soon to bring better definite news on the promise that government has ignored for 4 years.

Posted by Sonia McColl at 12:18 No comments:

Our President Sir Peter Bottomley, who is the Father of the House; spoke up for us in the debate that followed the Queen's Speech and we thank him.
You can see his contribution from the Queen's Speech Debate on Tuesday afternoon below.
The relevent exert is linked here: https://www.facebook.com/sirpeterbottomleyofficial/posts/425953739345802m
Posted by Sonia McColl at 12:51 No comments:

RPI TO CPI and the 10%
I have just listened to the Queen's speech and heard nothing that appears to be directly linked to the above that is included in the next parliamentary time table.
However, much has been done.  MPs are onboard and there are ways that a Bill can be included, if indeed it is not already planned.
RPI to CPI and the 10% affects every park home owner in the land, and the current RPI is causing much hardship.
An APPG (all party parliamentary group) meeting has been called for Monday 16th May.  I will be travelling to London to attend and I will ask the necessary questions and forcefully put forward the resident's case regarding the promises that government made 4 years ago.
I will report back after the meeting.
Best Wishes
Sonia
Posted by Sonia McColl at 07:34 No comments:

RPI  to  CPI.  WE MUST GET IT IN THE NEXT PARLIAMENTRY SESSION.  Please continue to lobby your MP on this and the 10% Commission.

Parliament is being prorogued today and is back in two weeks for the Queen’s speech. Lots of important legislation coming forward and much work to do nationally such as improving education, dealing with the cost of living crisis, and response to the Russian invasion of Ukraine.

But there are some issues that won’t make the front pages but for those affected is a big deal.

An example is the move from RPI to CPI for pitch fee increases for park home residents, I am pushing for this to be in our legislation next session. It’s a small and simple change but the right one, and what a difference it would make for my constituents who live in park homes.

UPDATE ON THE 10% THAT PHOJC has campaigned for.

Let's hope we hear something

positive after the Queen's Speech on May 10th.

Eddie Hughes Parliamentary Under Secretary of State (Department for Levelling Up, Housing and Communities)

A mobile home site owner is entitled to a maximum 10% commission on the sale of a mobile home by a resident. The department commissioned research on the likely impacts on residents and site owners of a change to the 10% commission paid on the sale of a park home. The research was carried out by the University of Liverpool last year and the final report submitted on 12 January 2022. While considering the findings it was decided further research was required to ensure the report was comprehensive. The final report has now been received by the department and it is currently being reviewed and prepared for publication. It will be published as soon as possible.

Posted by Sonia McColl at 09:12 No comments: