OUR JUSTICE CAMPAIGN IS PROUD TO HAVE BEEN
ABLE TO HELP AGE UK
WITH THEIR VERY WORTHWHILE CAMPAIGN.

I hope you’re well and getting ready for Christmas. I wanted to let you know that we now have around 46 MPs supporting the EDM on an energy efficiency scheme for park home residents and around 4000 people have signed our petition. This is fantastic news! You may have also seen the lovely Brian Gresty on BBC Breakfast on Wednesday morning this week and he was also on BBC Radio Wales yesterday with Age Cymru: http://bbc.in/1OcHfFp (listen at 1:13:20) 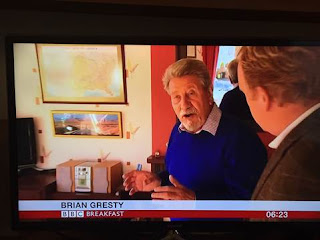 We couldn’t have done this without your support, so thank you again.

We are aiming to hand in the petition to Amber Rudd MP during Cold Homes Week, 1-5 February 2016, and ideally we would like to have 10,000 signatures on the petition.

Please could you help us reach this target by:
·         Promoting the petition and our target on your website or in your newsletter (a reminder for people to sign it)
·         Reminding people to return their paper petitions to us by 31 December, although there is a 2-week grace period so we will still be accepting petitions beyond that date. We have not had as many paper petitions back as we had hoped, so please encourage people to return them to us ASAP.

Thank you again for all your support to date. Have a lovely Christmas and New Year and let’s hope that 2016 is the year that we can get an energy efficiency scheme for park home resident.
Age UK

Following a successful launch event at the House of Commons, attended by over 30 MPs, there are now 38 MPs who have signed the Early Day Motion on an energy efficiency scheme for park home residents.
We have had a very encouraging response to our petition, with over 3000 people  signing to date.  The petition remains open to the end of December so there is still plenty of time for you to promote it and boost numbers prior to our hand-in which is scheduled for Cold Homes Week in February.

We have recently contacted MPs who:
·        Attended the launch event
·        Could not attend on the day but expressed interest in our campaign
·        Have shown interest in park homes in the past
·        Have signed the Early Day Motion
From December to end of January
We have suggested further actions for them to take to support the campaign, including
·        Sounding out their local authorities, Health and Wellbeing Boards and Local Enterprise Partnerships on the issue of cold homes in their constituency.
·        Suggesting they get in touch with their local Age UKs to arrange a visit to a local park home site to talk to residents about the problems of living in cold park homes in winter.
·        If their constituency is part of a consortia of local authorities submitting a devolution bid to the Treasury, we have asked them to encourage plans for funds to be allocated to an energy efficiency scheme for local park home sites.

Over the next 2 months, BBC Breakfast and Panorama plan to cover the issue of cold park homes and have been interviewing and filming some of our campaigners who live in park homes.

Jim Shannon, MP for Strangford, raised the issue in the House, which met with an encouraging response from Amber Rudd (see below):

DUP MP Jim Shannon explained that he had met with Age UK to discuss the lack of energy efficiency schemes in park homes.
Responding, Energy and Climate Change Secretary Amber Rudd said that issues relating to the Park Homes had been addressed in the last parliament, but noted that more was to be done. She would review the problem further, she noted.

Age UK launched it’s wider winter campaign for warm homes on Monday 23 November, calling on the Government to reform its energy efficiency programmes to enable all older people to live in a warm home.
New figures released by the ONS on 24 November show that over winter 2014/15 there were 40,800 excess winter deaths among the over 65s from cold-related illness such as heart attacks and strokes. The majority of deaths occurred among people aged 75 and over; there were an estimated 36,300 excess winter deaths in this age group in 2014/15, compared with 7,700 in people aged under 75. Numbers have more than doubled since 2013/14 when there were 18,200 excess winter deaths.

DEPARTMENT OF ENERGY AND CLIMATE CHANGE

Jim Shannon (Strangford) (DUP): I spoke to the Secretary of State about this beforehand. Yesterday, I met Age UK, which informed me of its concerns about the lack of energy efficiency schemes for those living in park homes. Ever mindful of the fact that the age of those living in park homes is from 55 upwards to perhaps 80, if she wants to make efficiency savings for them, she could reduce prices. What has been done for park homes?
The Secretary of State for Energy and Climate Change (Amber Rudd): We addressed some of the issues that are particularly challenging to park homes in the fuel poverty targets under the previous coalition Government. I agree with the hon. Gentleman that more needs to be done. It is particularly difficult for park homes without electricity meters. Those with electricity meters can access support, but the ones without them find it more difficult. I will certainly take that matter away and review it.

Park home owners should ask their MPs to write to Amber Rudd about the need for an energy efficiency scheme specifically tailored to park home residents - and if you have not already done so, please sign the Age UK petition. 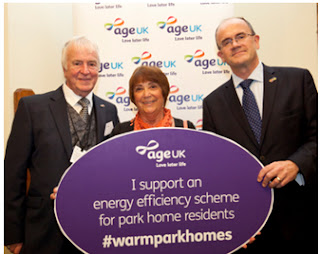 Yesterday Age UK launched its campaign for warm park homes with a packed event in the House of Commons. Over 30 MPs attended and pledged their support for the campaign, which is very encouraging.
Living in a park home – a static mobile home – is a popular lifestyle choice for many older people. Age UK estimates that there are over 100,000 older people living in park homes across England and Wales.
Park homes have advantages for people in or approaching retirement: they are often in idyllic rural locations, homes are single-storey which is a consideration for those with health or mobility problems, and they are more affordable than traditionally constructed homes.
THE DIFFICULTIES PARK HOME RESIDENTS FACE
However, park homes – especially older park homes – can be less energy efficient than other types of properties. Ninety-five per cent of park homes were built before 2005, when insulation standards weren’t included in the British Standard for Park Homes.
Many sites are not connected to the mains gas grid, meaning residents have to rely on more expensive fuels such as Liquid Petroleum Gas (LPG), oil and electricity.
While some park home residents can buy their energy directly from suppliers and therefore shop around for the best deals, many have a supply agreement with the park site owners, which can restrict their access to competitive energy tariffs and additional support such as the Warm Home Discount, Energy Company Obligation (ECO) and Priority Services Register.
LACK OF GOVERNMENT SUPPORT
Many park home residents are on fixed incomes and their only hope of support with heating their home is accessing one of the Government’s energy efficiency schemes.
However, with the Green Deal now closed and ECO contributions from energy suppliers typically insufficient to cover the full cost of heating systems, there is very little support available to them.
That’s why, through its campaign for warm park homes, Age UK is calling on the Government to roll out an energy efficiency scheme specifically tailored to park homes residents, which would enable them to reduce their heating costs and keep warm and well in winter.
Please watch our campaign film and sign our petition. With your help, many more older people will be able to keep warm and well in winter.

Please Download and sign the Age UK Warm Homes Petition below and return it Freepost to the Age UK Address.
and please get your friends and neighbours to sign. 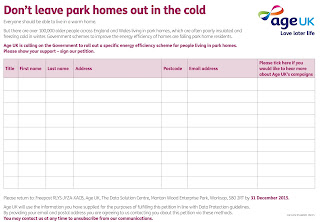 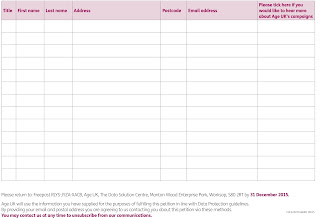 Our Justice Campaign
is proud to be working with Age UK to get warm homes for Park Home Residents.
Age UK's leaflet is laid out below with the address where you can obtain petitions.
Very soon the actual petition sheet will also be posted here.